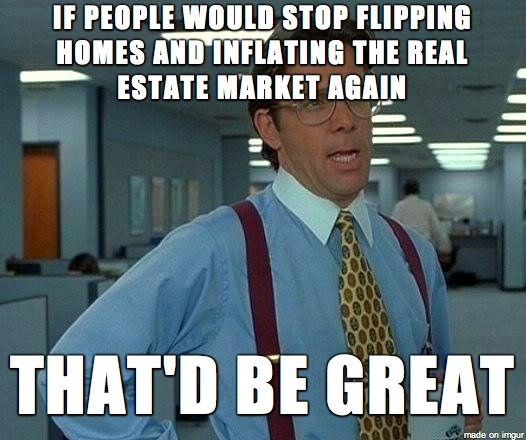 Inspired by HGTV programing and the opportunity to make “easy money,” house-flipping is one of the most talked about areas of the real estate market. The craze has inspired the restoration of thousands of outdated and rundown homes in the Chicago area. Notably, in lower-tier housing markets, flipping has helped revitalize housing stock. However, although profits for flippers have been good, strong evidence indicates the market is slowing. Flipped homes are making less profit and taking longer to sell.

Some theorize that the decline in the profitability of flipping homes is the result of shrinking inventory of foreclosures and distressed properties. While others believe the slowdown could be tied to the broader oversupply of upper-income housing. Still, a larger group of analysts suggest we are in a house flipping bubble.

The core of the house flipping bubble is likely due to the crisis in affordable urban housing for middle-income families. Most view the revitalization of Chicago’s housing stock as a blessing. However, for those looking for affordable housing, buyers are increasingly priced out of the market. For most first-time home buyers in urban areas, the average 2018 home price is perceived as unaffordable. Moreover, at the lower end of the market, demand is highest. Therefore, due to increasingly high demand, affordable homes are almost non-existent in the urban residential marketplace.

House Flipping is Increasing the Crisis

Exacerbating the issue, housing data indicates that the markets with the fastest declines in affordable housing are strongly correlated with house flipping activity. Consequently, analysts argue that for many markets, house flipping entrepreneurs may be pricing first-time buyers entirely out of the marketplace. For first-time home buyers looking for affordable homes in urban areas, the flipping trend has them in a bind.

As large swaths of metropolitan Chicago, Los Angles, and New York are unaffordable to the aging millennial population, something has to give. Consequently, in urban areas of metropolitan Chicago, the real estate market is due for a correction and/or mass millennial flight to cheaper suburban markets. Time will tell, but the current model is no longer sustainable for the majority of families living in urban areas.